OHLA is the professional organization that is dedicated to providing representation, information and resources for the Ohio lodging industry, promoting Ohio’s travel economy and increasing membership value.

OHLA is the key resource in reaching the Ohio Hospitality Industry. Allied Members receive many benefits through this exclusive membership program.

Welcome to OHLA! We’re here to help. Learn how we can help each other build a stronger industry.

Joe Savarise comes to OHLA from his role as a Senior Vice President with BIPAC, the Business-Industry Political Action Committee, based in in Washington, DC.  Joe joined BIPAC in January 2007. He oversaw a national field team and the deployment of an employer-to-employee communication and education program known as the “Prosperity Project” in states across the nation.  Part of his responsibility was providing a direct channel of service and support and communication to member businesses and business organizations throughout the country.  He helped grow BIPAC’s state network from just over 20 partners to more than 70 participating state, regional and local business organizations in 45 states, many of them state Chambers or joint Chamber/Manufacturer affiliates.  He worked with statewide business organizations each day to help facilitate more effective communications regarding public policy and elections to employees and associates.

He also served as a member of the Boards of Directors of the Ohio Prosperity Project and Prosperity Nevada 501(c)(4) entities.  With those organizations, he worked with a number of leading business organizations and corporations in each state to help educate employers and employees about the political process and elections.

Prior to working with the Prosperity Project, he served as Director of Communications and Public Affairs for the Professional Insurance Agents Association of Ohio.  He previously had experience as a staff member in the Ohio House of Representatives, including Minority Caucus Press Secretary, Policy/Research Staff, and Legislative Aide, as well as field staff and campaign manager for several state legislative campaigns.

Joe is a native Ohioan, born and raised in Ashtabula, and a graduate of the E.W. Scripps School of Journalism at Ohio University in Athens.   He and his wife Stacey reside in Pickerington.

As the Director of Education, Workforce & Programs, Cindy R. Sams leads the programming for several member councils and specific groups, seeks the right opportunities for our Allied Members with Sponsorships to meetings and events.

She coordinates the OHLA Allied Council, the Ohio Chapter of Women in Lodging (WIL) CONNECT, along with the Under 30 Gateway program focused on young professionals in the Lodging Industry.  As Staff liaison to the Education & Workforce Development Committee (EDU/WFD), action has increased in outreach to high schools, colleges and community training organizations to bring awareness to the jobs and careers in the Lodging Industry. Sams is active with Hospitality Instructors at Ohio’s College and University Hospitality Management Programs. She has grown the participation of students at the annual conference and kept them informed about what OHLA offers to them now and after graduation.

She gives guidance to meeting and event planning, with the Communications & Events Coordinator, including Lodging Council meetings for OHLA's local lodging councils and Board meetings. In addition, coordination of the OHLA’s Annual Conference and several city specific Stars of the Industry awards luncheons.

Sams joined the Ohio Hotel & Lodging Association September 2005. Her background in the travel and tourism industry, includes two years working at the Ohio Travel Association to assist in the planning and execution of Heartland Travel Showcase and eight years managing staff and volunteers at the Santa Maria tourist attraction in downtown Columbus. Retail management and merchandising were previous to that.

Embracing her love of art, she serves on the Columbus Arts Festival Steering Committee of GCAC, planning the annual arts festival in June. Sams is the owner of Canvased Floors LLC, www.cindysamsart.com, creating custom canvas floorcloths, etc.  Sams is a graduate of The Ohio State University, B.S. in Consumer and Textile Sciences. She lives with her husband Greg in Canal Winchester. Lauren Stazen joins OHLA after spending six years in the hotel sales industry. Lauren started her career fresh out of The Ohio State University’s hospitality management program in 2012 with Concord Hospitality. In college, Lauren was a Catering Student Manager and a part of the opening team of the new Ohio Union on Ohio State's campus which boasts 34 unique meeting & event spaces.

After graduation, Lauren was hired as a sales coordinator and was soon promoted to sales manager at the Residence Inn by Marriott Columbus Downtown. She then went on to be a part of the opening sales team for the Marriott & Residence Inn Columbus University Area which was a first of its kind dual property project. During this time Lauren served as President of the Hospitality Sales and Marketing Association International (HSMAI); Ohio Chapter and earned her Certified Tourism Ambassador (CTA) designation.

The position of Director of Membership brings Lauren back to why she fell in love with the hospitality industry originally; the people. She believes this position is a great platform to support the ever-growing travel economy that is present throughout Ohio.

Lauren continues to support the community outside of her professional role as a Board Member with the Junior League of Columbus which promotes voluntarism, develops the potential of women, and improves communities through effective action and the leadership of trained volunteers. Currently, she serves as the Management Council Vice Chair, overseeing the league's day to day operations.

Lauren lives in Westerville with her husband, Sean, and their Boxer/Pit rescue, Kyrie.

Halle Markwas joined OHLA in 2015 as the Director of Membership after serving in a successful association role as the Conference & Continuing Education Coordinator for the Ohio Physical Therapy Association. As part of the OHLA Membership Team in her new role as the Manager of Strategic Partnerships & Initiatives, Halle can focus her expertise on internal and external relationship management for the association, working primarily with Management & Ownership Groups and hotel brands, as well as industry partners.

Halle has a passion for our state and its tourism industry and travel economy. Although from Orville, Ohio, 200 miles north, she fell in love with the Queen City and what it had to offer. After graduating from the University of Cincinnati with a BS in Facilities & Hospitality Management and an AS in Business Management, Halle quickly became the go-to person for Cincinnati dining and entertainment.

Soon after moving to Columbus from Cincinnati, Halle embraced her new city and quickly earned her Certified Tourism Ambassador (CTA) designation. She has continued her professional education by passing the Certified Meeting Professional (CMP) exam in January 2015. Halle also serves as Vice President of the Ohio Chapter of the Hospitality Sales & Marketing Association International (HSMAI), was an instructor for the CMP Bootcamp Series (2016-2017), and is an active member of Rotary Club International since 2009.

Halle lives in Dublin, Ohio with her husband, TJ and their son, Lane.  Also part of the Markwas household - their Siberian Husky, Zeus. 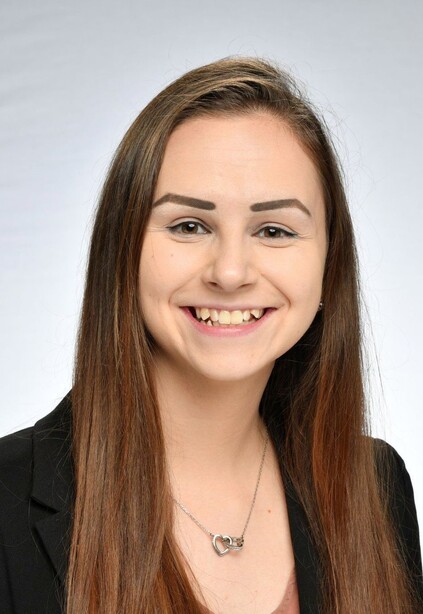 Michele Marcinick began at OHLA as the Hospitality and Communications intern in January of 2018 as a part of her Hospitality Management course study at The Ohio State University. After completing her internship and graduating with her Bachelor of Science in May of 2018 she officially joined the OHLA professional staff as the Communications & Events Coordinator in June of the same year. Since then, she has earned her Certified Tourism Ambassador (CTA) designation and grown in her position, planning 35-50 events a year for the association and connecting OHLA members through social media and communications.

Michele is no stranger to the hospitality industry as she began her career in food service at the age of 16. Since then she has worked with OHLA member The Crowne Plaza Columbus Downtown and at Ohio State’s Fawcett Center as a Banquet Service Student Manager.

She has grown her passion and expertise for event planning not only through her degree, but also in her extra-curricular activities. Michele served as the Commencement Week Chair on the Major Campus Events Committee (now OUAB) at Ohio State for two years, planning student body functions for over 1,500 individuals.

Remaining active in the Columbus community by volunteering, Michele currently holds the position of Treasurer in the Gamma Alumni Chapter of the service organization, Phi Upsilon Omicron (Phi U) and as of the 2020-21 year, is taking on her role as a New Member Advisor for the Junior League of Columbus.

Michael T. Evans is the contract lobbyist for the Ohio Hotel & Lodging. In July 2012, Michael founded All Phase Consulting, a government affairs solutions company, after serving as OHLA's Director of Government Affairs and Communication between 2008 and 2012. As OHLA's contracted lobbyist through All Phase Consulting, Michael will continue to manage numerous legislative programs, prepare and offer testimony, draft amendments to legislation, initiates grassroots campaigns, and assists in PAC strategy development for OHLA.

Evans' government affairs experience stems from state legislative campaigns, lobbying in the executive, state and local braches, and trade association management. As a result, she has a vast knowledge of both issue and candidate campaign strategy.